Over the past 5 years, and longer, I have sat back and painfully watched the stellar price rises of European sports cars. The once ‘relatively’ achievable cars of my dreams have since appreciated into oblivion and well out of reach of the average buyer.

No doubt cars like these are destined to become garage queens and been seen less and less on the roads, but it does pose the questions, what’s next? And out of these what can still be afforded by the average enthusiast?

One of the trends I noticed when watching some of the stellar rises is that the bottom comes when the prices become achievable for the enthusiasts, who unlike collectors, drive, modify, and race the cars. This combined with iconic styling for the period and a declining stock pool create a recipe for price rises and collectability. 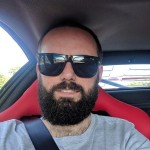 James is the Founder of FitMyCar and a total car nerd. At 5’11”, and with calves as wide as he is tall, he could be the most weirdly proportioned CEO in the world to ever write an auto blog.

The Car Bin: In Review

6 Car Fluids You Need to Check Regularly
3 weeks ago

What Does This Summer’s La Nina Mean For Your Car?
8 months ago